Enhancing the appearance and image of Elstead.

Responding to comments in 2018 that compared to French villages, the Elstead public areas were dowdy. A group of volunteers met to see what could be done.

For immediate impact a Christmas Tree was erected on the Village Green. This needed the consent of Elstead Parish Council, which was readily given together with funds to cover the cost of the tree lights. The tree was donated by James Giles of Natural England and Richard Knight cut and mounted the tree.

Parish Council support further extended to the formation of a sub-committee of the Parish Council to be called the Our Elstead Committee (OEC) including the active volunteers under the chairmanship of Councillor John Mathisen.

Anne Brooke formed the Our Elstead Facebook Group which now has over 150 members indicating strong support for the campaign. 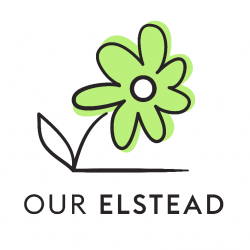 The 'Our Elstead' Committee

Join our Facebook Group to find out more and get involved.
Email us to sign up and receive information on how you can help.

In the autumn we would like to plant more daffodils and other spring bulbs on the green spaces around the village. Donations of bulbs would be most welcome.  We will arrange litter picks when necessary. The popularity of the Christmas Tree means this will be repeated. Suggestions of community carol signing with mulled wine and mince pies have been made.

The story so far

Planters on the Village Green - Summer 2019

While the Village Green is an attractive village centre it does lack colour. We bought three planters for summer flowers. To meet the cost, we sought sponsors and received seven offers, accepting the first three received each donating £150.

The sponsors are VantagePoint (www.vantagepointmag.co.uk ) is the free local monthly magazine and e-newsletter and two local families, the Holroyds and the Butlers.  Waverley BC supplied a good load of their compost and the plants were bought from Hazelbank Nursery in Tilford by Diana Mathisen who also planted and nurtured the planters. Richard Knight transported them to the Green.

A rota of waterers, Hazel Craig, Jenny Else, Peggy Tilly, Wendy Formstone, Di Snape and Diana Mathisen water and dead head the planters. These planters have been widely praised and we may have further planters in 2020.

On Saturday June 22nd, in preparation for the invasion of competitors and visitors for the Marathon on June 27th, two working parties were arranged. Peggy and Ben Tilly with Di and David Snape revisited the riverside picnic area to cut back undergrowth, clear weeds and rubbish and plant more flowers where the runners emerge from the River Wey.

Meanwhile the second party consisting of Hazel Craig, Peter & Maggie Waddell, David & Jennie Else, Hilary Petman, Derek Saunders, John & Diana Mathisen attacked the roads and paths around the Village Green and the Woolpack picking up litter and clearing the gutters of weeds and earth filling 20+ bags.

We were invited to have a stall at the School Fete. To attract visitors, we had a Guess the Number of Beans in the bottle competition. The number was 2,791 and the clear winner was a mere 20 beans away – possibly more by luck than judgement. Guesses ranged from less than 100 to over 10,000.  We are grateful to the PTA for inviting us and enjoyed meeting children, parents and grandparents to discuss our objectives.

On Saturday March 30th, as part of Keep Britain Tidy’s Great British Spring Clean, we organised a litter pick around the Parish. Fourteen volunteers met at 10am on the Village Green and another twelve at 2:30pm. We collected a staggering 38 bags of litter, a further 7 bags or boxes of bottles, including 80 large Magners Cider. This was after 6 bags had been collected by Spar staff. On Monday, St James’s School covered Thursley Road Recreation Ground area, giving a grand total of 50 bags. Reporting to the Great British Spring Clean means we are now Litter Heroes!

We also reported to Waverley BC larger fly tipping debris such as a car tyre, car wheel, three hubcaps, lorry battery, a bath, sand bags and a wrought iron gate. The bulk of the litter was in the hedge rows of Farnham, Thursley and Milford Roads including Shackleford Road junction. Why do people chuck litter out of their car windows?

Litter picks are carried out with the support of and following the safety Rules of Waverley BC. They provide yellow jackets, litter pickers and black bags and also collect the litter afterwards.

The first project was to clear up the picnic area, two benches under the shade of a weeping willow, beside Elstead Bridge. It is the only place you can see our 13th century Bridge, a Grade 1 Listed Building and a Scheduled Ancient Monument built by monks from Waverley Abbey. It is also where Marathon runners emerge from the river.

However, it had been neglected – mud and grass covering the flagstones, shrubs in urgent need of pruning, overhanging branches down to the ground, a storm drain blocked with debris. A dozen people turned up with spades, rakes, choppers and a chain saw. Bridge House helpfully cut back their overhanging trees and in two hours it looked much better.

An open day was held for villagers to meet the committee in the Youth Centre. Thirty five people gave their consent (necessary for GDPR) for their names and email addresses to be kept to allow direct contact when volunteers are needed.

OEC welcomes more volunteers; there is no subscription and no time commitment. When a project is planned, we inform volunteers by email; if you are free the please join in. Some projects have been known to end in one of our Pubs!

As soon as we met, we were asked to smarten up the Thursley Road route of the 1918/2018 Silent March. On October 20th, eight people met at the Green to collect litter there and along the route. We also arranged for Richard Knight to cut back the undergrowth on the Stacey’s farm Road side.